SGR founder Ron Holifield selected the chess knight as the logo for SGR because it represents what we believe is a noble calling to Recruit, Assess and Develop Innovative, Collaborative Authentic Leaders in local government - something that goes beyond simply running a business.

There are five primary flows of thought which served as inspiration for the Knight as SGR’s logo.

Throughout his career as a city manager, and today as SGR’s CEO, Ron always coaches both elected officials and employees to “play chess not checkers”. When dealing with any complex issue, you must move beyond thinking about the next move, and think about the move after that, and the move after that. As a result, the Knight represents SGR’s commitment to STRATEGIC VISIONING. A public official who “plays chess instead of checkers” knows they must.

The Knight is the most versatile piece on the chessboard. It is an attack piece (not defense), which can move eight different directions, move right over barriers, and has a tendency to leverage surprise moves to its advantage. As a result, the Knight represents SGR’s commitment to INNOVATION.

Ron shares a love of playing chess with his son, Austin. As Ron taught his son to play chess, over time Austin developed skills far superior to Ron. SGR exists to develop the next generation of innovative thought leaders in local government who will exceed the skills of their teachers. As a result, the Knight symbolizes SGR’s commitment to LEADERSHIP DEVELOPMENT and the sense of the Student becoming the Master and excelling beyond the teacher’s ability.

The lead character in the 60’s television show Have Gun Will Travel used a chess knight as his “brand” and the show is an excellent allegory for City Managers. “A knight without armor in a savage land" in the show’s theme song captures the sense of a city manager on the front line in a savage political environment with none of the armor of political allies or employee grievance processes, or legal protections.

City Managers tend to be “champions for hire” who are engaged in a noble calling larger and more important than the tactical task at hand… and most tend to move on when the job is done. They have unique skills as highly skilled political gunfighters, yet, they do everything possible to avoid utilizing those precise skills. Indeed, their duty is to avoid engaging in political gunfire, but when they have to do so, the really good CM’s are very good at it. The theme song also says “A chess knight of silver, is his badge of trust”. As a result, the Knight symbolizes SGR’s commitment to AUTHENTICITY of leadership that is intensely integrity driven.

The lead character played by Richard Boone, was named Paladin and he carried a very simple business card: 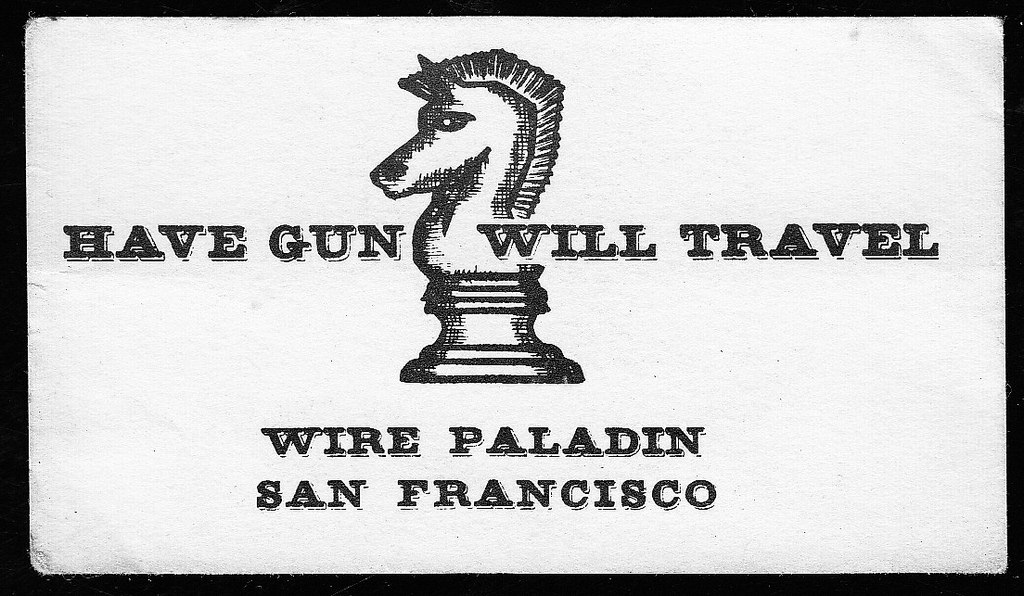 The Paladin allegory referred to the 12 noble knights in Charlemagne’s inner circle and although they are historically real figures, they later became fictional characters and representative of knights who took on noble causes in literature. Sometimes known as the Twelve Peers, the paladins were the foremost warriors of Charlemagne’s Court and may have influenced the legends of the Knights of the Roundtable who were known for collaborating. Over the centuries, the word “paladin” came to refer to any chivalrous hero. For example, in Dungeons and Dragons, the paladin is a holy warrior with a strict code of conduct that resembles a knight in shining armor. As a result, the Knight symbolizes SGR’s commitment to INTEGRITY.